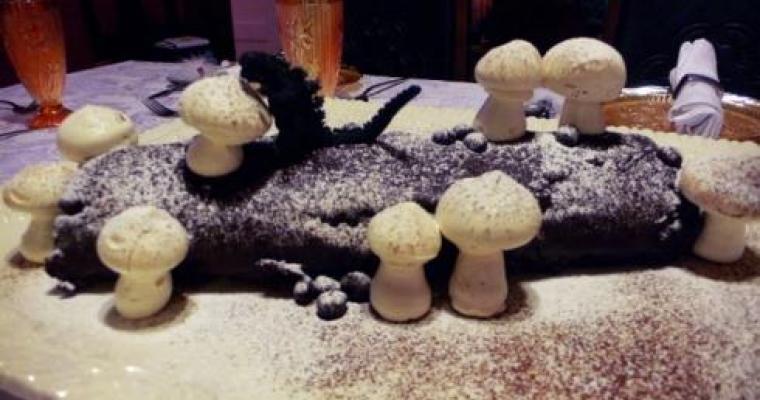 Christmas Log 2013 in Paris : The finest in the world

Published on 11 December 2013 in Flavors and Gastronomy

Christmas log 2013 in Paris are words guaranteed to stimulate the tastebuds of lovers of Yuletide seasonal delicacies everywhere. The wonderful French buche de Noel is a treat that simply has to be sampled by aficionados of delicious desserts, and as Paris is the world epicentre of tempting and exquisite pastry and chocolate creations, this is where the very best are to be found. We at Les Plumes Hotel have our particular favourite pastry chefs and will be delighted to send you in their direction. But before we move on to prestigious patisseries, allow us to give you some background on this charming tradition.

The buche de Noel which we all love owes its shape and significance to a tradition which was practiced in Europe before the advent of Christianity in this continent. Shaped to resemble a chopped log, this tasty treat represents the logs which were burnt in pagan hearths in the coldest and darkest period of winter. Ancient societies could never be truly sure if the sun would return from the depths of Winter to bestow upon them the new hope and new life of Spring, and so they would burn fires during the Winter solstice to encourage the return of the sun.

This practice was kept on even when pagan peoples were converted to Christianity, and the Yule Log became associated with the Christmas period. Most of us no longer have open hearths in which to warm ourselves before burning logs, and so the tradition has transformed itself over time into a new manifestation. Today we enjoy exquisitely crafted cakes decorated to resemble actual chopped logs, complete with tree rings, textured 'bark' and a sprinkling of sweet 'snow'. In France the buche de Noel has become an art form and each year the leading pastry chefs of Paris present their most delightful creations. Jean-Paul Hévin, Pierre Hermé, Damien Piscioneri at the Café Pushkin, Maison du Chocolat are some of the wizards of pastry recommended by Les Plumes Hotel.

From Les Plumes Hotel enjoy a Christmas log 2013 in Paris

At Les Plumes Hotel we are lovers of tradition and we delight in Christmas fare. From your accommodation here you can search for the most delightful buche de Noel.