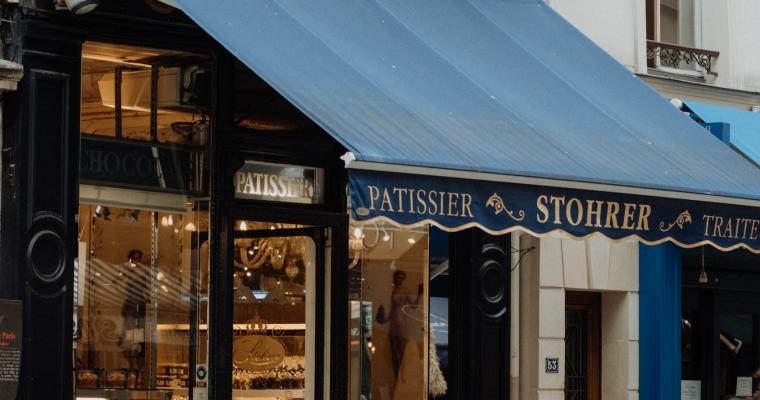 Published on 7 February 2022 in Flavors and Gastronomy

Paris is undoubtedly the city of love, but it’s also a city of gastronomy. From small traditional bistros to large, prestigious starred restaurants, good cuisine is elevated here to the level of an art de vivre. Today, your Hotel Les Plumes team suggests you take a temptingly tasty trip to the famous pâtisserie Stohrer, a symbol of gourmet Paris... Immerse yourself in the atmosphere and aesthetics and, above all, indulge yourself!

Stohrer, quite a story…

Entering the original Stohrer shop is like taking a step into history! In fact, this pâtisserie located in the Rue Montorgueil, in the 2nd arrondissement of Paris, is listed as a Historic Monument. The original decor was enhanced by one of the 19th century painter Paul Baudry's students. This was where Nicolas Stohrer, pâtissier to the King of Poland and then to Louis XV, set up his first shop. There, he invented, among other things, the rum baba and bouchées à la reine and became a visionary by coordinating the creativity of various trades that had been very distinct until then, such as those of gaufriers, confectioners, etc.

A wide range of delicious delights

The hardest part of your visit will undoubtedly be making your choice... Each more beautiful than the last, the creations of the maison Stohrer invite you to discover and indulge. The rum baba is a must, as is the old-fashioned religieuse and the traditional kouglof and babkas. You’ll also find yourself sorely tempted by the Stohrer Black Forest gateau, Paris-Brest and Mille-feuilles. And the cakes, puff pastries and éclairs will help you to rediscover the sublime flavours of childhood...

Your Hotel Les Plumes team love to share their favourite addresses with you, including those that evoke the history of Paris but also those of exceptional artisans who continually demonstrate their awesome savoir-faire. It’s obvious that the pâtisserie Stohrer fits perfectly into these two categories. Head there and treat yourself to an indulgent gourmet experience!