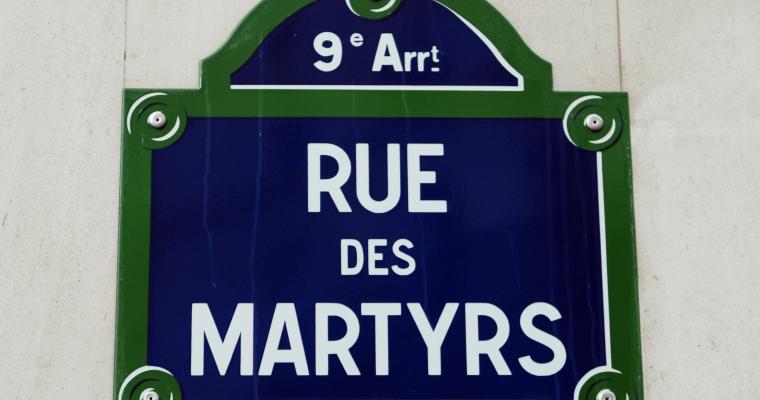 Just a few steps from the Hotel les Plumes you can find the Rue des Martyrs. A very lively shopping street, it connects the 9th arrondissement to Montmartre and borders two very lively districts: Abbesses and Pigalle. With the street’s beguiling mix of restaurants, cabarets, and shops, there’s always something interesting going on...

The Rue des Martyrs takes its name from a grim episode in Parisian history: the beheading of Saint Denis, the first bishop of Paris, in the 3rd century. Despite its ominous name, the street is actually synonymous with partying! Very early on, it provided a haven for places of pleasure, cabarets and brothels. Artists settled there in what was regarded as a neighbourhood neatly balanced between the more intellectual 9th arrondissement and the vibrant atmosphere of Montmartre. Géricault, Ravel, Balzac, and Alfred Stevens are some of the famous names who resided there for a time. The tradition of art and fun still lives on today with the cabarets Chez Michou and Madame Arthur and the performance hall called Le Divan du Monde.

Our favourite addresses on the Rue des Martyrs

There’s no shortage of places to eat on the Rue des Martyrs, but here are the ones we particularly recommend. Let's first head to the Iberian Peninsula with Paris-Porto. This Franco-Portuguese delicatessen offers fine foodstuffs lovingly selected from small Portuguese producers. It also offers a magnificent showcase of Portuguese culture and has a terrace that is very inviting. A few steps away is Yoom, where the menu is dedicated exclusively to the delightful small Chinese dishes known as Dim Sum. Finally, don’t leave the Rue des Martyrs without treating yourself to some choux from Popelini. It’s exquisite!

The Rue des Martyrs has its own personality. Take the time to explore it during your stay at the Hotel Les Plumes. Cultural and gourmet surprises await you!