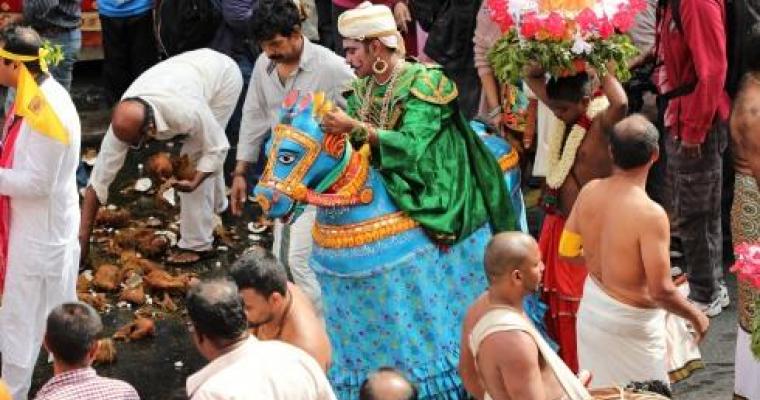 Plan a stay at Les Plumes Hotel to attend an amazing event in the City of Light.

For a few hours Paris takes on an Indian air, and exudes a festive fragrance for the festival of Ganesh.
The Ganesh Festival has been a Parisian tradition for almost 10 years,  and is organised to honour Ganesh the son of great Shiva.  As such, the procession from the temple is dedicated to Sri Manicka Vinayakar Alayam.

On August 30th in Paris, or more particularly in the 18th arrondissement, this colourful event will showcase India.
In tribute to the Indian god of wisdom and prudence, the parade will begin at the Temple, which is located at 17 Pajol street in the 18th district. Religious ceremonies will start at 9 a.m. and the procession will proceed from 11.00  to 15.00.
Spectators will enjoy seeing a host of participants in the parade, including flute players and dancers complete with the iconic terracotta pot headdress. In this somewhat atypical atmosphere, magnificent statues of Ganesh will appear to float on the air as if by magic. Other participants dressed in the traditional costume (sari or vesti) march past, sprinkling rosewater and saffron to scent the air.
Follow tradition and break a coconut to offer your heart to Ganesha. Remember that the shell represents the world, while the flesh symbolises karma and water, the human ego.

A stay at Les Plumes Hotel allows you to easily take part in these grand, not-to-be-missed annual festivities.