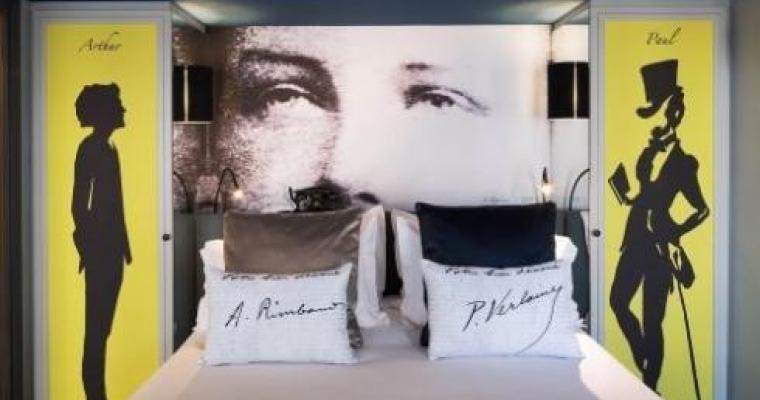 Published on 9 September 2015 in Hotel

Located in the heart of Paris, the most romantic city, Les Plumes Hotel is a celebration of love that has dedicated the décor of its rooms, not just to some of the most famous couples of the 19th century, but also to all lovers who embrace romance and passion, everlasting love and fiery interludes.

Do you prefer Verlaine, Hugo or Sand?

Whatever your preference, you’ll find the perfect room at Les Plumes Hotel.
Georges Sand, born Aurore Dupin, was a modern, independent woman who dressed in male clothes and reinvented herself as a man in order to write and protest against the submission of women and their position in society. Her love life was just as passionate, and it was her love affair with Alfred de Musset that we pay tribute to with a room where men’s and women’s accoutrements mingle, where the elegant grey/beige of the wall complements footboards shaped like stiletto heeled shoes.
The equally stormy passions of Arthur Rimbaud and Paul Verlaine are evoked with the yellow of absinthe, and furniture that oscillates between Baroque and modern. Silhouettes of the young poet and the older dandy bring the passionate carnal and literary love of the couple to life within the walls of the "Paul and Arthur" room.

Secret? The liaison between Victor Hugo and Juliette Drouet wasn’t secret for long. And it is known that the young actress remained the writer’s constant companion for 50 years. She accompanied him in his exile on Jersey, and wrote him more than 20,000 beautiful letters. The room is cosy for lovers, and an intimate pinkish, beige tone promises that a lifetime of love is possible!
Free from all mythical references, the "shack" room evokes a hidden refuge, while hidden under the foliage "Grenier and secrets", nestles under the roof and invites all lovers to invent their own legend!