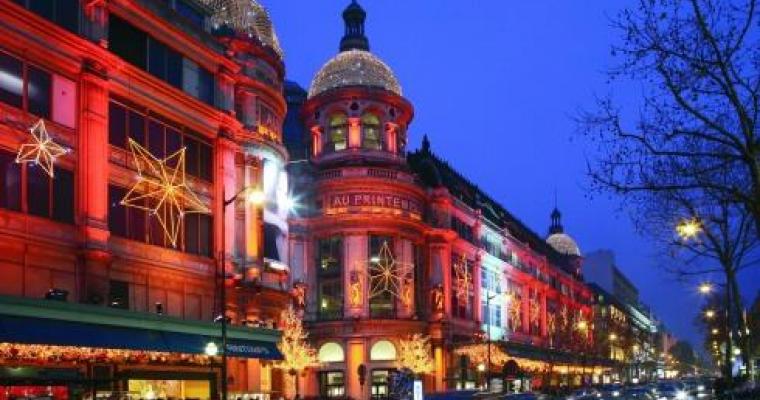 Published on 4 December 2014 in Events

The Christmas window displays at world famous Parisian department stores such as Galeries Lafayette and Printemps are eagerly anticipated every year. That’s because this beloved festive tradition leads to greater and greater creativity each Yuletide as the stores try to outdo each other and surpass their own previous efforts with lavish, imaginative and dynamic displays. Les Plumes Hotel is located close to the Boulevard Haussmann Grands Magasins, so you can take a stroll and enjoy the spectacle as this famous thoroughfare is turned into a place of festive magic.

The legendary department store Galeries Lafayette promises all shoppers a monster Christmas in 2014. Under the famous Art Nouveau dome the 25 metre high Christmas tree is there as usual but this year it’s been turned upside down and Gustave and his monster gang are responsible! They’ll be creating further mischief, so watch out, as you’ll never know when there might be a monster about while you’re hunting for Christmas gifts. But Gustave and his friends are not as fearsome as they like to pretend. They’re also very eager to please and are happy to put on impromptu shows for the enjoyment of all the family. And just wait until you see what they’re getting up to in the store’s windows on Le Noël Monstre.

Along the boulevard at Galeries Lafayette’s rival department store, Printemps, things are just as busy and the place is brimming with Christmas cheer. This year Printemps have teamed up with the well- known Burberry brand to present a Noël Voyage Magique. You’ll watch in awe and wonder as young Tom and his faithful teddy bear companion take a seasonal voyage of adventure by umbrella through the night skies of Christmas from London to Paris. It’s a huge 3D presentation on the store’s façade that will have you and your family gasping in delight. The traditional Printemps animated window displays have also been created by Burberry this year and are an absolute joy.