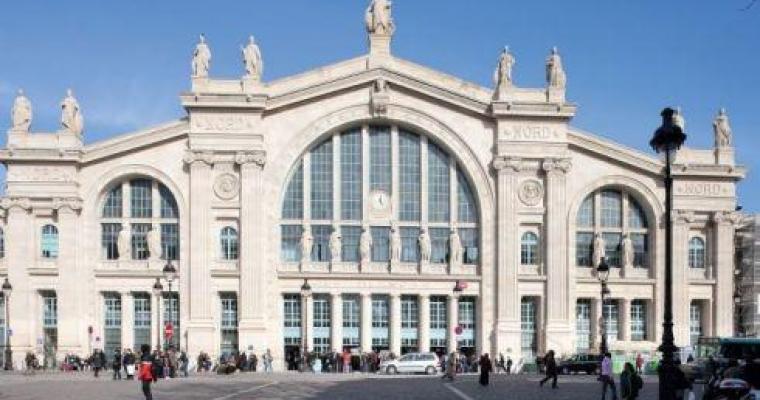 Paris hotel near Gare du Nord : this North Station is one of six railway termini in Paris operated by France's national state-owned railway system, the S.N.C.F. Dealing with almost 190 million passengers each year, the Gare du Nord is considered to be the busiest railway station in Europe. It has connections with various public transport systems including the Metro, RER and bus lines, and serves Northern France, Belgium, Holland, Germany, and the United Kingdom via Eurostar. Les Plumes Hotel is about a mile, or less than fifteen minutes' walk, from this major transport hub.

Paris hotel near Gare du Nord; a landmark of transport and architecture

The Gare du Nord railway station was originally built in 1846, but was subsequently found to be insufficiently large to deal with the volume of transport required in that golden era of booming railway usage. This first version was demolished in 1860, and a new building erected from 1861 to 1865. Although not quite finished, it was inaugurated for use in 1864.

The architect chosen was Jacques Hittorff, who redesigned the Place de la Concorde, and specialised in the new cast iron technology and also a conservative classicism. The wonderful façade was designed in Beaux Arts style around a triumphal arch. It bears eight statues crowning the cornice, representing international destinations, and a further twelve evoking northern French cities. The support pillars were manufactured at a foundry in Glasgow; the only one in Europe large enough to tackle the job.

Today the "gare du nord" station still retains its period charm, but also has the modern facilities you would expect. It boasts a shopping mall including an exchange bureau and cash machines. WiFi connectivity is available throughout the station.

Our elegant and sophisticated hotel is close to this major transport hub, but also reflects the charm of 19th century Paris that the station embodies. Les Plumes Hotel represents a timeless classicism and also presents an impressive façade. Our helpful staff will be glad to help you with all your travel arrangements.