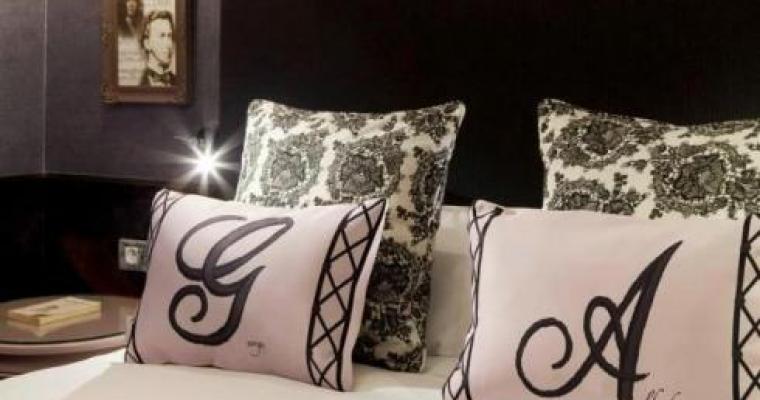 Paris Romantic Boutique Hotel and a Tale of Literary Lovers

Paris romantic boutique hotel Les Plumes Hotel would like to tell you about another pair of 19th century lovers who have inspired our theme and décor. Previously we told you of Victor Hugo and Juliette Drouet, this time our inspirational pairing are Alfred de Musset and George Sand. Our George et Alfred rooms playfully merge the dichotomy of male and female style to produce something unique and memorable and we think you would love a stay here. Read on to find out why they inspire us.

The poet, dramatist and novelist Alfred de Musset was born in Paris in 1810. Demonstrating a flair for the dramatic as a child, he went on to become one of the earliest writers of the Romantic movement and published his first collection of poems in 1829. He became the librarian of the Ministry of the Interior and was politically active. In 1833 he met George Sand.

George Sand was the nom de plume of Amantine Lucile Aurore Dupin, a prolific novelist and a strikingly passionate woman who scandalised the society of the day by dressing in male clothing. She was a few years older than Alfred and their relationship was a tempestuous one. These were two people who were passionate by nature and committed to their creativity. Their time together was less than two years, but had a profound and lasting impact upon both. After a trip to Venice during which Alfred became ill and suffered delusions they grew apart as lovers but remained friends and correspondents.

Each wrote of the relationship. Alfred did so in the novel for which he is most famed today, The Confession of a Child of the Century, and George chronicled their love in her Elle et Lui a short time after Alfred's passing. He died at a relatively young age due to his alcoholism and a long standing heart condition. After their affair, George went on to have relationships with Franz Liszt and Frederic Chopin.

Alfred described his George as '...The most womanly woman.' and admired her as an intellectual equal. She is famously quoted as saying 'There is only one happiness in life, to love and be loved.'

The almost mythical lovers of 19th century Paris are a beloved theme of Les Plumes Hotel. In an upcoming entry we will tell you of Paul Verlaine and Arthur Rimbaud.