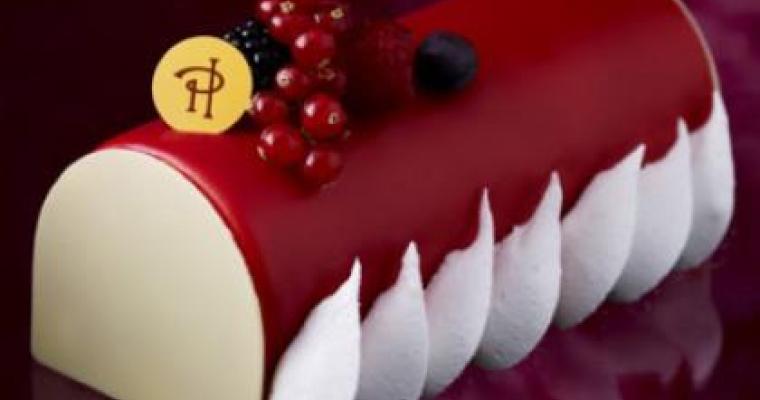 Published on 14 November 2015 in Flavors and Gastronomy

Pierre Hermé has created four superb Christmas logs for your New Year meal – pure gourmet delights to be enjoyed and savoured. Luckily, his Wonderland workshop is just a few steps from Les Plumes Hotel – but don’t forget to book!

A pastry chef with his own wax statue at the Grevin Museum and making his appearance at Larousse is difficult to imagine. Pierre Hermé is nevertheless a pastry chef who has conquered the world with his delicious pastry and chocolate creations, including the famous Isfahan macaroon, and who has renewed the genre with a collection of exceptional unpublished, and irresistibly tempting, recipes. Originally from Alsace, the chef has been dubbed the "Picasso of pastry" by Vogue magazine and “Kitchen Emperor" by the New York Times. He can’t fail to impress in his own inimitable way, with the perfect end to celebratory meals on December 25th and New Year's Eve.

The master has donned his famous cap to offer you a gourmet collection of Yule logs that will melt the heart and seduce the most reluctant palate, the most refined tastes and the most delicate appetites. Indeed, Pierre Hermé has taken care to adapt his masterpieces to the diversity of your guests. Even those who still associate this traditional dessert with a lourdade image won’t believe their eyes, never mind their taste buds.

A world of delights

The names of these wonders alone are enough to evoke a world of refinement and delight. "L’infiniment Vanille", for example, combines several cream flavours for a result that is sweet and sumptuous while the "Sarah" log is an exquisite blend of chocolate, chestnut and passion fruit cream in a stylish marriage of flavours. The “Perpétua" will delight chocolate lovers with its meltingly delicious crunch of shortbread and soft, creamy secret centre. As for the "Chocolate-yuzu" log, it is a delicate blend of chocolate, yuzu and matcha tea that will transport you to new planes of happiness.
Chic gourmet geeks – be sure to run and get your order in fast!