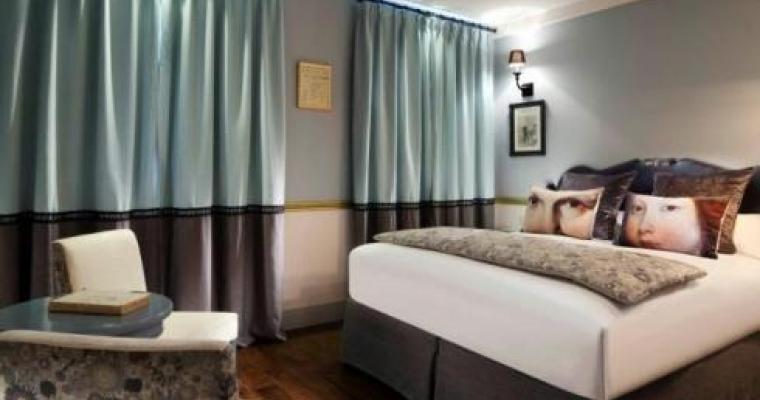 Romantic boutique hotel in Paris where every room has a story to tell, Les Plumes Hotel pays homage to the iconic lovers of the 19th century. The décor of our rooms reflects these lives entwined by passion and the tales are enthralling ones. So much so that we would love to relate them to you. Let us begin with the romance of Juliette Drouet and Victor Hugo, a relationship which spanned fifty years and 20,000 letters, and which is represented by our Juliette and Victor rooms.

Romantic boutique hotel in Paris presents a story of devotion

In what more powerful way can a person demonstrate their passion than by sacrificing another passion? This is what Juliette Drouet did when she gave up her acting career to devote herself to her lover, the acclaimed writer, Victor Hugo. Noted for her intense performances and legendary beauty, Juliette caught the eye of Victor in 1833 when she played Princess Negroni in his drama Lucrece Borgia.

Victor had published his first full length novel, The Hunchback of Notre Dame, to great acclaim two years previously. He was already married to Adele, so Juliette became his mistress, embarking on a relationship that was to outlast his marriage. When Victor spoke out against the rule of Napoleon III and incurred official wrath, Juliette arranged for him to escape from France and go into exile in Belgium and the Channel Islands, where she joined him.

Before Adele's death, she and Juliette came to an understanding and acceptance of one another. Following his wife's passing, Victor took Juliette as his acknowledged companion and she could stand publicly at his side for the first time. At the age of 77, Juliette became seriously ill and died in her lover's arms as he kissed her. He never fully recovered from the loss and in his remaining two years of life he wrote no more.

Les Plumes Hotel is a romantic boutique hotel in Paris

In upcoming entries we at Les Plumes Hotel will be delighted to tell you about the other lovers who inspire the décor of our rooms.