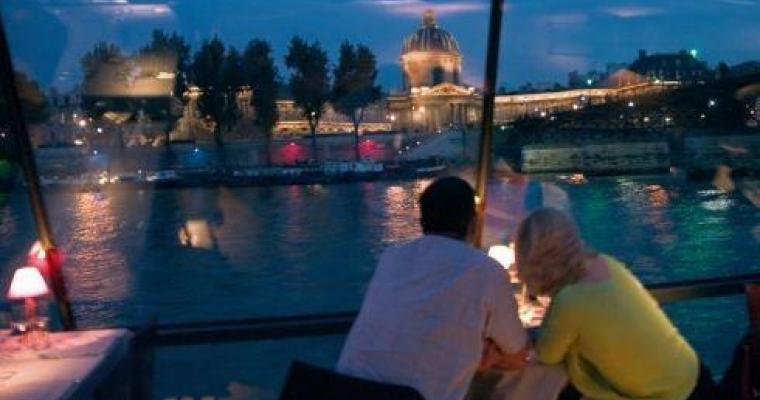 Romantic river cruise Paris ; whether a guided tour, a lunch cruise, or a night time dinner cruise on which you are dressed for the occasion, you can be sure of an experience which will stay with you forever. Gliding along one of the world's great rivers past landmarks of exquisite beauty; what could be more romantic? Les Plumes Hotel , where romantic liaisons are a theme close to our heart, recommends these unforgettable moments.

From Dijon in the Alps to Le Havre and the Channel, the River Seine winds its way across France, but nowhere does it glide through a more romantic setting than when this historic waterway flows sinuously through the heart of Paris.

Amidst the galleries, churches, museums and monuments of a city steeped in history, by tree lined banks, and by moored riverboats the Seine sweeps. Under 37 bridges reflecting a span of four centuries drifts the river where Joan of Arc's ashes were scattered, and whose banks were strolled by artists and writers during the Belle Epoque.

From the Seine the city looks different. The statuary chased in gold, the walls of greenery along the banks from which ancient spires emerge loftily, the splendid majesty of Notre Dame Cathedral as you drift by the island over which it holds court; all are seen from a new perspective, at once fresh and also somehow intimate.

At night Paris as viewed from the Seine looks different again, as the City Of Light fulfills its name and magnificent architecture is picked out in illuminated splendour. The Eiffel Tower seems bathed in a golden glow, and reflected lights twinkle upon the dark water.

At Les Plumes Hotel the romantic past mingles with the joyous present. Our beautifully designed hotel takes as its theme the great romantic liaisons of 19th century Paris, so when we recommend a cruise along the world's most romantic river, we speak with assurance.