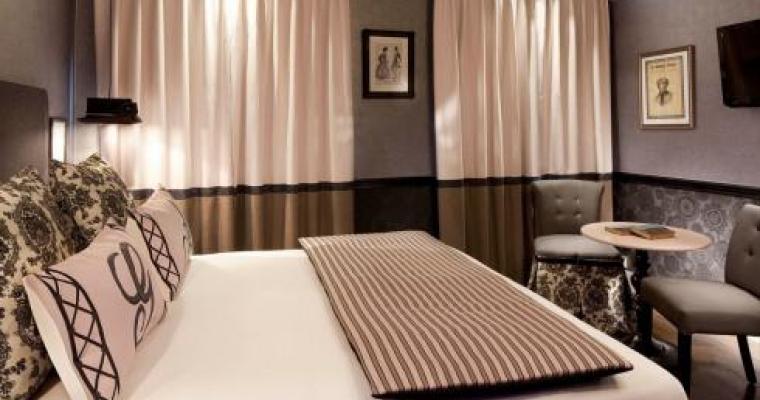 Sand and Musset story of a love passion

George Sand and Alfred de Musset: two passionate people and two names that evoke the spirit of passion and romance. Les Plumes Hotel invites you to explore the love and romance of this mythical couple. Welcome to the “George and Alfred" room.

George Sand, whose real name was Aurore Dupin, was a woman with a passion for romantic literature. After a childhood in the countryside, she published her first novels while she was still very young, and through them claimed the right of women to enjoy freedom and passion. In defiance of convention, she chose to take a male pseudonym and dress as a man to enter places that were forbidden to her as a woman. In June 1833, aged 29, this great seductress met Alfred de Musset, a handsome and cultivated young man from a middle class family, during a dinner. An inveterate seducer and womaniser, he was friends with Hugo, Vigny and Mérimée. The pair shared a passion for writing and George Sand was intrigued by this uncommonly intelligent young man.

Romantic and desperate, George and Alfred embody the exaltation of love.

Sand and Musset met again and, in July, after reading Sand’s novel ‘Lélia’, the tale of a young woman who prefers carnal pleasures and joys to suffering and meditation, Alfred de Musset wrote "I'm in love with you. I have been from the first day I met you.” Two years of intimacy and passion followed as the young writer embarked on an affair with the novelist who was seven years his senior. This crazy love story inspired Musset's "Confessions of a Child of the Century" in 1836 and Sand’s novel "Him and Her" in 1859. Their idyll ended in 1833 during a stay in Italy when the young woman began an affair with a doctor who had been called to treat her ailing lover. After he recovered, Musset returned to France while Sand remained in Venice.

The end of a beautiful romance

Carnal desires and passion developed into a series of epistolary reports and missives that demonstrated that their love hadn’t fled for good. Reconciliation, strife, jealousy, reunion and separation, Sand had no more words to put on paper when she was driven to cut off her hair to send to the love that she had never forgotten. Their all-consuming and destructive affair finally came to an end in 1835.