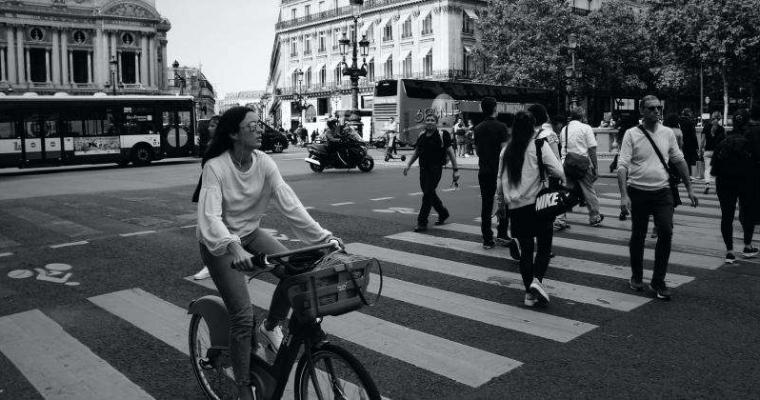 Take a tour of the Rue de Rivoli by bike!

The global health crisis has had some positive effects. It’s made us think about our urban mobility and it’s pushed certain cities to take socially and environmentally significant decisions. Your Hotel Les Plumes team is excited to tell you about a great new development here in Paris; the transformation of the Rue de Rivoli into a bikeway.

The Rue de Rivoli is no ordinary street! Created during the great 19th century reconfiguration of the City of Light, its three-kilometre length connects the beautiful districts of the west and the artisans’ quarters in the east, while cutting unerringly through the capital’s historic heart. Heading along it, you will be tracing a route that is an important aspect of the history of Paris; a route that sweeps majestically past the Hôtel de Ville and the Tour Saint-Jacques, the Louvre and the Jardins des Tuileries before arriving at the Place de la Concorde.

A ride on the Rue de Rivoli

Taking the time to pedal the Rue de Rivoli at your leisure will allow you to see the major monuments along its length but also presents an opportunity to discover many small and fascinating details you might otherwise miss. These include the buildings where the writers Chateaubriand, Ionesco, Tolstoy and Turgenev lived, as well as plaques commemorating the heroic actions of the resistance fighters of the French Forces of the Interior during the Liberation of Paris in 1944. Of course, the reputation of the Rue de Rivoli is built primarily on luxury brands. Far from the noise and pollution of cars, your shopping will be all the more pleasant!

Paris is becoming increasingly welcoming to greener modes of travel. If you enjoy a quiet stroll, a shopping trip or a bike ride, the transformation of the Rue de Rivoli into a bikeway is excellent news. Be sure to take advantage of it during your stay at the Hotel Les Plumes.

Your stay can be canceled until the day before your arrival, do not hesitate to book.

We offer a half-board offer with tasty meals from Les bocaux du Bistrot delivered directly to your room.

For a change of scenery, we also welcome you to telecommute.