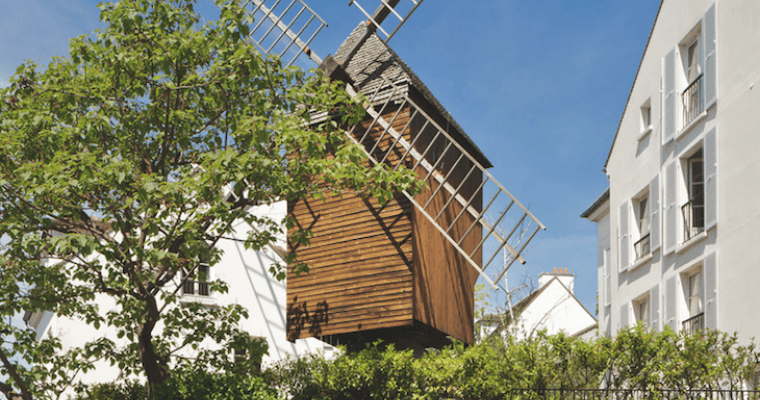 Published on 5 March 2020 in Flavors and Gastronomy

When we think of Montmartre, we think of the Moulin Rouge, the steps, the Sacré Coeur Basilica, the Place du Tertre and, of course, the Moulin de la Galette. Situated in the heart of the city, the graceful silhouette of the last windmill in Paris is a surprising sight. Discover its history and enjoy a delicious meal in its fine gourmet restaurant during your stay at the Hotel Les Plumes...

The story of the Moulin de la Galette

The story of the Moulin de la Galette takes us back in time to the Belle Époque, when the Parisian bourgeois came to the cabarets of Montmartre to slum it along with the ‘little people’, see dancers perform the raucous French Cancan and drink absinthe. The Moulin de la Galette by then no longer served its original function as a windmill but had become a tavern and dance hall where stars of the era such as the dancers Valentin le Désossé and La Goulue performed. Artists of the era immortalised these scenes. Renoir, Van Gogh, Picasso, Toulouse-Lautrec and others captured this legendary venue on canvas.

Occupying the premises of the old tavern, the Moulin de la Galette restaurant has managed to maintain a bucolic atmosphere that is quite surprising in the heart of Paris. With its paved interior courtyard filled with greenery, its sunny terraces and its large windows overlooking all of Paris, the restaurant boasts a wonderful setting. You’re sure to enjoy a cuisine that is based on traditional recipes, including Burgundy escargot, duck terrine and sweetbreads, all reinterpreted in a contemporary way. A delight!

Your Hotel Les Plumes invites you to discover this place brimming with Parisian and artistic history. Visit the Moulin de la Galette and experience the skill and creativity of the current chef, Pascal Taprest and his team.